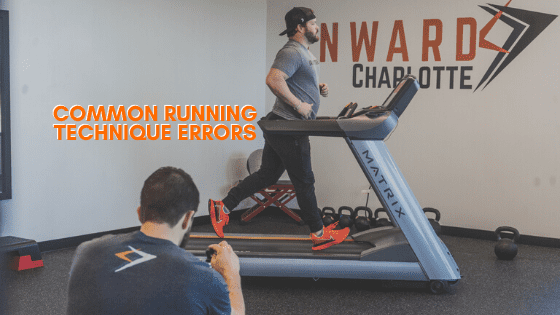 There’s nothing like the surge of endorphins post-run, sweat dripping as you reflect proudly on your hard work. But have you ever wondered if you’re getting the most out of your runs?  Maybe you have your annual knee flare-up that keeps sneaking back in. Perhaps you’ve suffered from a running-related injury in the past and can’t seem to figure out why. In this article, we’ll cover three very common running technique errors that may be robbing your performance and holding you back!

This running error commonly shows up during the midstance. To clarify, this is the period of your running cycle where you’re supported on one leg and that leg is directly under your body. During this phase, greater demands are placed on the muscles on the side of your hip on the leg you’re standing on. These muscles work to keep your hips and pelvis relatively level as you run. However, when these muscles lack sufficient strength, we commonly see the hip on the non-stance leg drop below the desired level. This is what we refer to as “hip drop” and is also known as a Trendelenburg gait.

Of note, some amount of this is normal and expected. But when significant and combined with the repetitive stress of running, we commonly see secondary problems result. This may include issues such as the low back, hip, knee, or other lower extremity pain.

The performance also takes a hit as your running becomes less efficient and excess energy is spent covering the same ground. Fortunately, with targeted strengthening of these muscles and specific drills, we can drastically improve this fault!

This is another common running technique fault we see that typically pairs with the above. When we see athletes run with a very narrow base of support or even crossing over the midline, they too often lack sufficient lateral hip strength. While this may also contribute to the previously mentioned increases in stress on lower extremity joints, we again see a loss of efficiency and performance hindered.

When we run, we are typically trying to get from point A to point B. Additionally, we are trying to do it as quickly as possible with the least amount of energy. This is efficiency. We want all of our energy to be devoted to forward progress. A running pattern that crosses midline or includes excessive hip drop is one that loses energy laterally (side to side). These two faults both respond great to strength training in a manner specific to running.

Along with strengthening, another drill we commonly give athletes struggling with this fault is hitting their warm-up on a track or on a surface with visible lines if able. You can do this without an actual line, but it can be a great cue while retraining this pattern. The goal will be to focus on keeping your legs on either side of the line during your warm-up. Next, try to maintain the feel of this as you progress into your actual training.

While technically two faults, they often come as a pair during initial contact. This happens for several reasons. Perhaps you’re running at a cadence too slow. In turn, this is forcing you to take larger steps to cover the same distance. Maybe you’ve simply never been coached on foot placement and landing mechanics.

If we look at the image of an athlete demonstrating these faults, there are a few things to note. At this angle, not only is there increased stress transferred through the ankle, shin, knee, and hip, but we also must consider the impact on performance. With these faults, instead of forward momentum, we see a large brake-like force the athlete must now overcome. This results in slower running and more energy to maintain the same velocity.

While cadence is highly variable, elite runners average around 180 steps per minute. This number may not be YOUR exact ideal cadence. However, shortening your stride while maintaining the same pace (by increasing your step rate) can decrease the amount of force per step. Using a metronome to track your current cadence and then incrementally progressing the beats per minute is a great way to work on correcting this.

If you’ve been ramping up your mileage only to run into plateaus or injuries that set you back, check out our running technique evaluation for in-depth analysis and a personalized plan to attack your goals head-on. We’ll dive into your training and history, move into a thorough orthopedic exam, and break out your running form with in-depth video analysis. This will let our team of physical therapists come up with individualized strategies to keep moving towards your goals!

Lower Back Sore After Deadlifts? Try These Movements for Relief!

Top 5 Exercises for Back Pain During Pregnancy

3 Ways to Improve Your Running Health